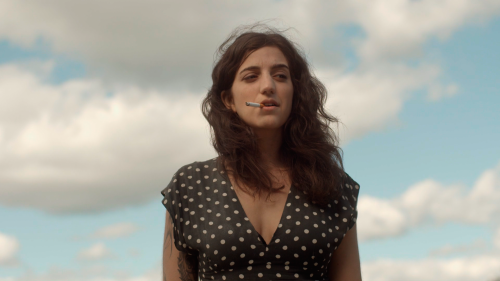 Director Kat Hunt compels her friend Erica to take revenge on the men in her life in this experimental, docu-fiction comedy.

An innovative hybrid work, WHAT’S REVENGE adapts elements from 70’s pulp revenge cinema to address the problems and pitfalls of relationships in the modern age. The film uses a blend of staged reenactments of real events and fictionalized scenarios inspired by the lived experiences of the cast and crew. A feminist piece of genre-bending film, made by an entirely female production team, Hunt plays the chief provocateur in a story of two friends seeking to explain the reason behind the injustices inflicted upon them by the men in their lives. Hunt’s character makes a personal mission of revisiting these indignities upon “the men” in question, on a mission to take their power back in the process. By using non-actors and their stories throughout, Hunt crafts a complex and comedic take on relationships and filmmaking.

Kat Hunt is an interdisciplinary artist living in New York. Her career has taken her from the United Nations to Saatchi & Saatchi China to working on the award-winning OUR NIXON (CNN). Hunt’s films and artwork have shown at EYE Film Museum Amsterdam, National Gallery of Iceland, Bonnefantenmuseum Maastricht, Museum Hilversum, East China Normal University Shanghai, A.I.R. Gallery New York, Brooklyn Arts Council, Krowswork Gallery Oakland, and more. She is a co-founder of the international women’s collective, Moon Church. WHAT’S REVENGE is her first mid-length film. CANDIED VIOLETS, a short about flowers and the patriarchy, is forthcoming.