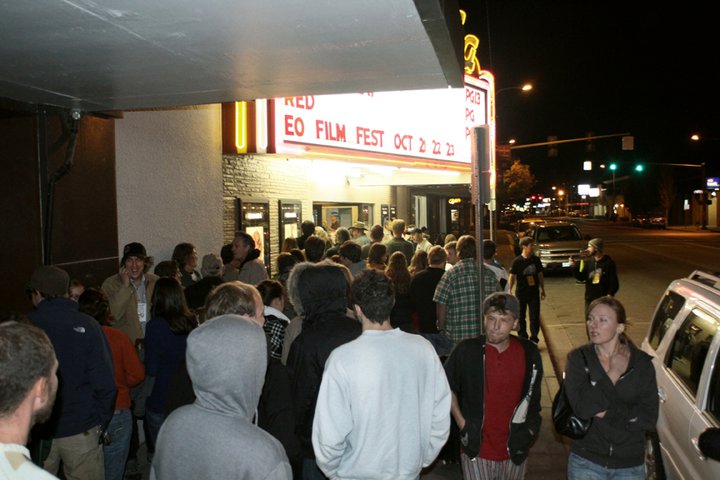 The 2011 Eastern Oregon Film Festival is starting the countdown.  Festival passes are now available, sponsoring opportunities are being finalized, submissions are closed and the programmers are smiling.  Check out the offerings and information below – get your pass (they will go fast) and stay tuned as the music line-up starts spilling out.

Festival Passes are a way of supporting the Eastern Oregon Film Festival (EOFF) while taking advantage of great offers from local businesses and all-access admission to exciting activities. The first chance to obtain the coveted festival pass is to become a FESTIVAL FRIEND. As a friend you will receive your all-access festival pass(s), official 2011 EOFF apparel, recognition on our website / program, and more. Additional information and online purchasing is available at the website: http://www.eofilmfest.com

Festival dates for 2011 are October 20, 21, & 22 in downtown La Grande, Oregon. All films are screened at the Granada Theatre and after parties, for all 3 nights, will be held at various downtown venues.

SPONSORS ARE STEPPING UP: EOFF launched their 2011 Sponsor webpage on July 1 to start acknowledging the great businesses and organizations that are supporting our 3rd year of the Eastern Oregon Film Festival. Visit the sponsors’ page to see for yourself. https://eofilmfest.com/2011-sponsors/

EOFF is still seeking additional sponsors to assist both financially and with in-kind services for this year’s event. To see how your business or organization can help, visit our sponsorship opportunities page listed above.

Hillfolk Noir (Boise, ID) will again be in the house for the 2011 Eastern Oregon Film Festival.  In 2010 the band set the tone for what was to become the “best 3 days for film and music in downtown La Grande”.  More on the band and performace times as the festival rolls out the Official Music Line-Up. (Press your ear hard!)

Eastern Oregon Film Festival is a non-profit organization dedicated to creating a cinematic experience in Eastern Oregon that promotes discovery, entertainment, and education via artistic exhibition and viewership. Through the mediums of independent film and music we aim to expand the cultural experience within our region.

Eastern Oregon Film Festival had a tremendous 2010 year screening 20 films, showcasing 4 bands, and having a heck of a lot of fun.  The festival reached out to filmmakers across the globe and was blessed by the participation of such filmmakers as Matthew Porterfield (Putty Hill), Jessica Oreck (Beetle Queen Conquers Tokyo), Kentucker Audley (Open Five) and many more.