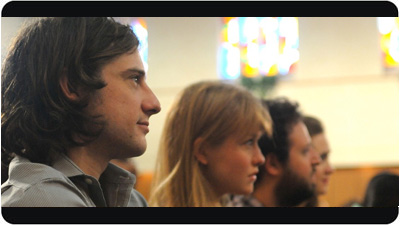 A short film about advertising, friendship and breast pumps.

A simple yet disturbing story of an elderly woman who has grown tired of living.

The story of Jake, a struggling musician and his sidekick, Kentucker, a maker of “poor” films and what happens when two girls (Lucy and Rose) venture down to Memphis for a long weekend.

Join Gregory Fairweather for another adventure in education, hallucination, and the outdoors.

Billy Was a Deaf Kid

The classic “I hate your guts, no wait, I like you, my brother is deaf, let’s ride a couch down the street” love story.

On the outskirts of Prague, Anna shows up for a dubbing session of an American film. What follows is something unforeseen, and gives us a unique glimpse into the depths of Anna’s inner world.

One man’s determination to track down a rare woodpecker wreaking havoc on his house puts him on the warpath.

A small town Mockumentary film crew head into the small college town of La Grande Oregon to uncover the truth behind super hero sightings in the area but what they find…will change their view of shopping…forever.

A classic tale of vengeance and justice. Shot and edited in 48 hours for the La Grande Summer Film Project.

A universal comedy that begs to answer the age old question, can a tiger truly change their stripes?

A reclusive young man lives out his days exploring the surrounding landscape and collecting discarded treasures, spending most of his time in isolation until he meets Bonnie.

A story about a guy chasing his pants in the desert – sometimes the pants chase him too.

The Age of Stupid

The Age of Stupid stars Pete Postlethwaite as a man living in the devastated future world of 2055, looking at old footage and asking: why didn’t we stop climate change when we had the chance?

A short film about heartache.

A computer animated, audio visual abstraction. Produced by designers at the Academy of Art University, San Francisco, with the blessing of Berlin artist AGF.