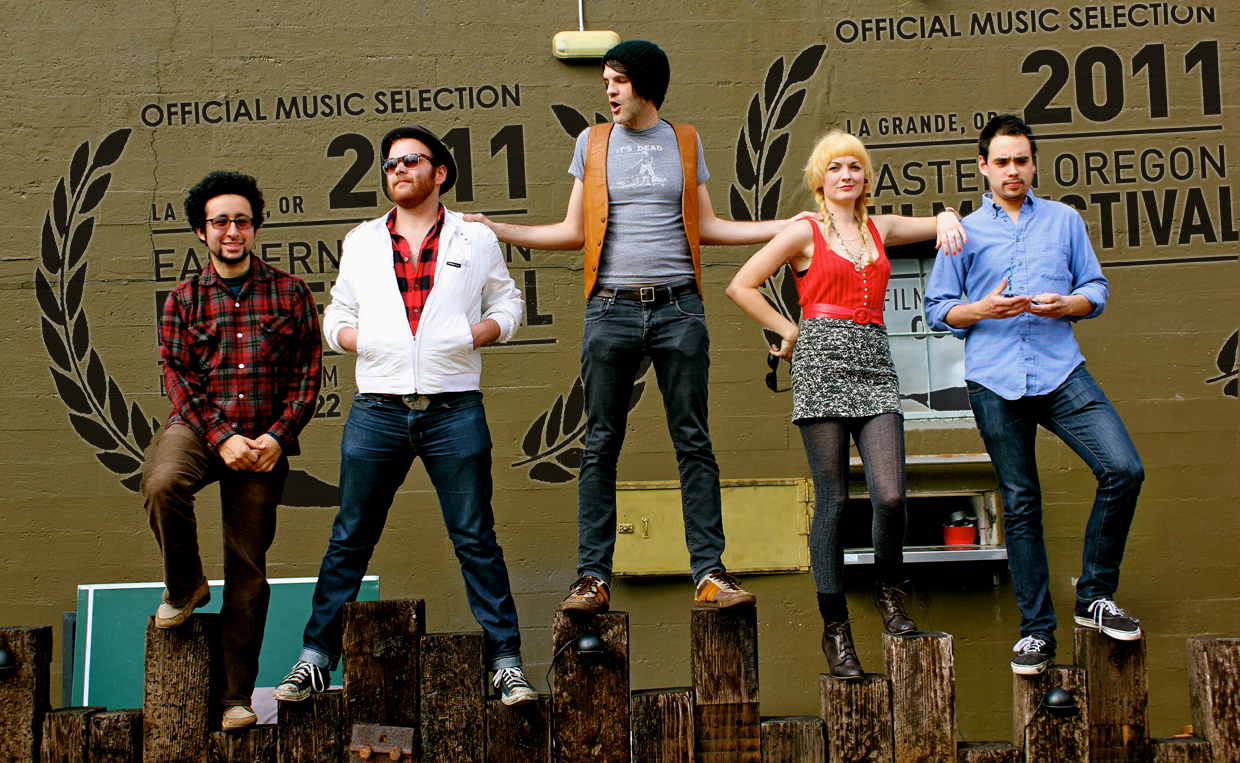 Eastern Oregon Film Festival is plump with excitement to announce our final 2011 Official Music Selection – hailing from the tenderest parts of Portlandia — Jared Mees & The Grown Children. Jared Mees, at the helm of both the band and Tender Loving Empire (the Portland- based record label, screenprinting studio, and local-centric handmade consignment shop he runs with wife Brianne) is no stranger to La Grande. This gang has experienced, participated in, and impressed upon the music community here for years, conveying Mees’ lighter side of the darkest darks in their upbeat yet heartfelt performances. EOFF is pleased to bring their presence out of the  Crawlspace and into the Grande Ronde limelight.

“Only Good Thoughts Can Stay is a gutsy, modern-day luminary in these often dark, troubling times.”

Despite its title, Only Good Thoughts Can Stay is not an anthem for blind faith in simple pleasures. Pairing sometimes dark lyrical matter with uptempo major-chord progressions, the newest album from Portland, Oregon’s Jared Mees and the Grown Children examines the give-and-take inherent in struggles for self-fulfillment while walking a tightrope between naive exuberance and cynical skepticism. This balancing act results in a sound that is joyful yet introspective; a rollicking Americana tale of modern life, be it hellish or heavenly.

“With heartfelt lyrics and spirited rhythms, the latest from Jared Mees & the Grown Children is just as soulful as someone like Edward Sharpe and the Magnetic Zeroes and equally as fun.”

Backing him up on this record are Grown Children Megan Spear, Mees’ long-time harmonic partner, keyboardist, and percussionist; Javier Madrigal on lead guitar and trumpet; Quilty Kim on bass and backing vocals; and drummer Joe Bowden.

Spear’s soaring vocals are the Yin to Mees’ gravely, half-spoken Yang, while Madrigal’s jangly guitar solos add a rich complexity to the band’s pop aesthetic. In Bowden, the newest addition to the recently solidified lineup, Mees has found a linchpin: a rock drummer who has the chops and energy to drive the songs forward, but also the dynamics and sensibility to underscore rather than overpower them. This finesse serves the album well as it expands and contracts between spare, twinkling piano melodies tapped out on Spear’s keyboard and boisterous swells of guitars, strings, horns, and choral arrangements.

From the first euphoric lines of album-opener “Hungry Like a Tiger” (“I’m breathing good air, through good lungs, with a good heart beating”) to the unstoppable catharsis of the 7-minute barn-burner sing-along “Juicy Fruit,” Only Good Thoughts Can Stay weaves a dense fabric of instrumentation around a central narrative patchwork. Lyrically, Mees has forgone the strictly first-person storytelling that characterized 2008’s Caffeine, Alcohol, Sunshine, Money in favor of embodying the perspectives and personal experiences of close friends and family, including his wife (“W.W.J.B.D”), his brother (“Billy Bird”), and a longtime friend (“Inaudible Song”), all of whom shared many of the trials and tribulations that provided inspiration for the record.

“Shake” (Off the album Only Good Thoughts Can Stay)

Recorded at Portland’s Type Foundry Studios under the engineering and production hand of Adam Selzer (M. Ward, Laura Veirs), the album features cello, viola, trumpet, kettle drum, Hammond organ, and Nashville guitar in addition to the traditional guitar-bass-drums setup, as well as a bevy of organic elements. Syncopated group handclaps open “Limber Hearts;” a choir of hollering souls descends on “Graverobbers;” Selzer’s dog Stella even chips in to lead a chorus of howls on “Billy Bird.” In the recording process, the band set out to capture the facile energy and spontaneity of their interactive live sets–raucous affairs which have been known to end with Mees leading a final call-and-response from atop Bowden’s kick drum while crowd members rush the stage.

At the helm of both The Grown Children and Tender Loving Empire (the Portland-based record label, screenprinting studio, and local-centric handmade consignment shop he runs with wife Brianne), life has been frighteningly uncertain during three very tough economic years; it has been cruel, through various personal setbacks; and it has been emotionally draining, as when facing the hardship of having multiple friends fall mentally ill within the same year. But it has ultimately been redemptive, and Mees has wrung the sweat of an uphill battle into an oasis of reflective hope. The result is an album that testifies to the resiliency of the human spirit, while acknowledging that the brightest light is always the one at the end of a tunnel.

Paste Magazine Premieres Video For “Hungry Like A Tiger”