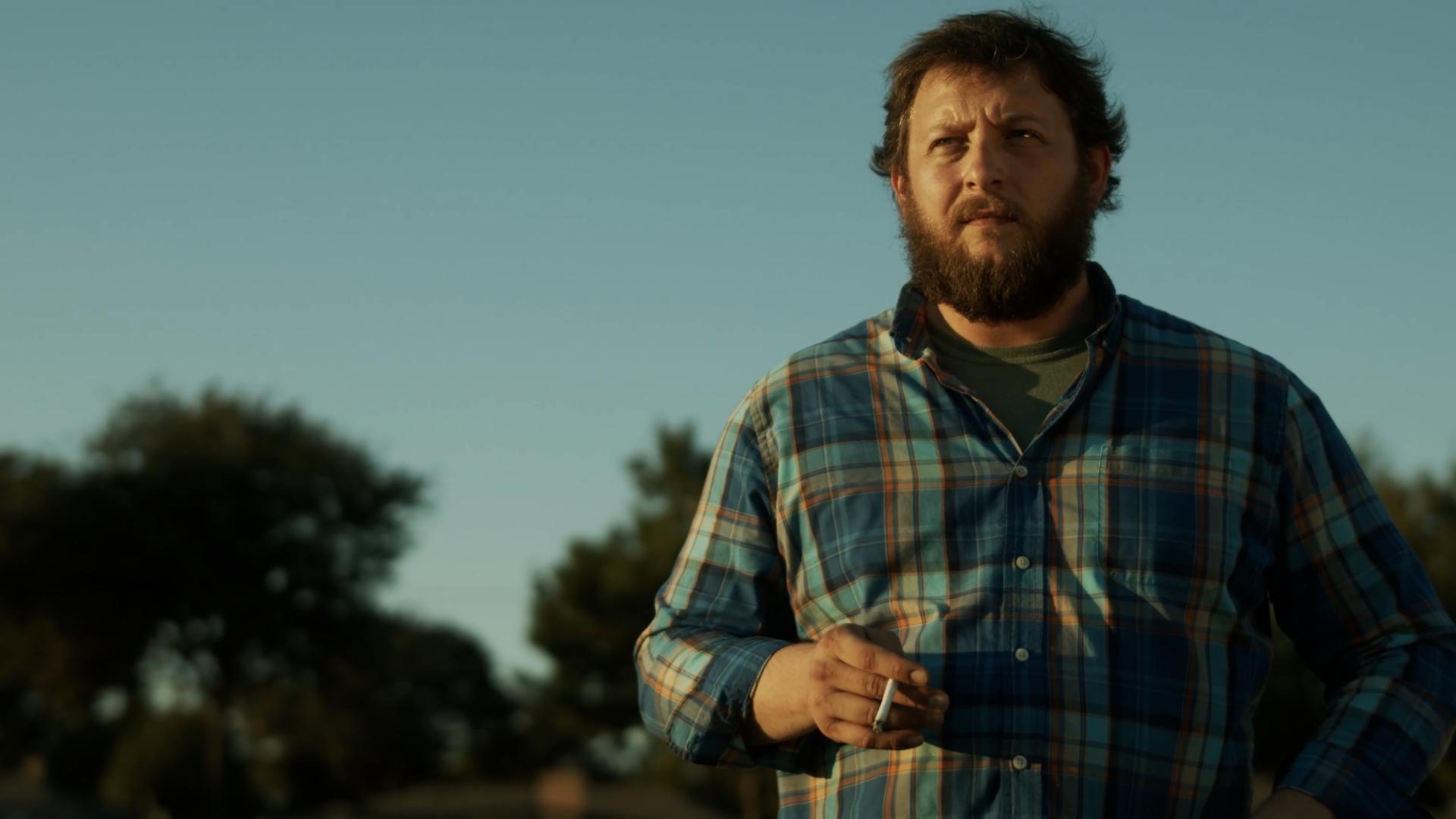 Living in a time where abusive fathers and bullying are common place, a boy defends that he did what was right. Always searching for the right way to live, the realities of life surround him. He realizes that any advice, besides that that comes from within, is worthless. At 12 years of age, he is forced to now become a part of an adult world. The boy must immediately figure out how to live as A Good Man, regardless of the consequences.

A LARK AND A SWALLOW Director Parker Winship

A young mother is stuck between development and decay. Desperate to connect, she strikes a chord that links to the deepest parts of our memory.

A short film based on the true experiences of a Black girl growing up in a predominantly white city.

Over the course of a day, a man with stolen valor moves towards acting out a horrible atrocity.

It’s July 7th, 1994. The Sojourner Rover has landed on Mars. Meanwhile, in a wind-blown California desert town, Janet Leigh McMillan is packing away her deceased, hateful mother’s house in preparation of a sale. As a 20-year old single mother, this is the break she needed to catch. Now, if only she could find the damn dog.

After a traumatic experience we follow Riley through his trials and tribulations living with OCD. Black Bear aims to challenge the stereotypes and educate audiences on the symptoms and struggles of OCD through our protagonist Riley, and his road to recovery.

Shot entirely on 16mm color film, CENTURY: summer showcases hough’s family farm in St. Paul, Oregon. The farm was recently awarded Century Farm status by the state of Oregon, having been farmed by her family for over 100 years. Her Uncle has operated the farm independently since the 1990’s, and now finds himself in transition as he moves into retirement. The film highlights life on the small farm while in high production during the Summer months, emphasizing how to connect with land, work and family history

A guy invites a girl he’s recently started dating to his friend Ozzy’s apartment for a party. Unbeknownst to him, it’s a “Conspiracy Party.”

Under Paris’ glittering Eiffel Tower, undocumented Senegalese migrants sell miniature souvenirs of the monument, to support their families back home. Far from their loved ones and hounded by the police, each day is a struggle through darkness in the City of Lights.

Dispatches from the Vietnam War: Beer, Bunkers and Typewriters’ follows the surreal and existential journey of a young soldier entering war for the first time. Not long after I first met Lloyd I started hearing stories about his time in Vietnam during the war. Each one cut through the archetypes I had often heard about the war and wars in general. Each one insightful and nuanced. Each one led to a desire to hear more.

DOWN ON OUR LUCK Director Paul K. OH

Down On Our Luck started as an over ambitious web series and it’s bittersweet that it’s coming to an end. Everyone is moving to new and exciting things. David Coursey is working on The Bread Line, a progressive newsletter. I’m currently setting up the Wholesome Film Festival, a 11 short film line up of “wholesome” stories.

After getting dumped, Maia seeks solace by crashing with her best ex Alex.

An a chunky, lonely ghost gets a shot at happiness when a woman on the run holds up in his abandoned apartment.

A brilliant geneticist is on the verge of a breakthrough that could change humanity, but when her experiment is discovered, she will have to make an impossible choice.

From the inception of a musical idea, through the recording process and live performance, this short documentary tells the story of Jeff Pifher and his band Socrates’ Trial and their idea of what jazz can be today.

Lloyd, a mortgage broker, is a man short on credibility. When he’s fired from his job for “consuming alcohol in the workplace” – on the same day as his wife’s surprise birthday party – he sees the chance to win back the faith of his loved ones in grand style. But his quest takes a depraved turn.

An American woman travels deep into to the Amazon jungle discouraged with her marriage & on a quest for adventure, nature and a new sense of belonging. She unexpectedly meets Noe, an amazonian painter who teaches what true belonging really means

Marisa Anderson’s instrumental music is full of texture and moods—it can evoke landscapes or the light at a certain time of day. Known internationally for her guitar mastery, Anderson walks us through her evolution as player and composer. Filmed entirely at the Suttle Lodge in Oregon.

THE OTHER SIDE OF THE HILL Director James Parker

Other Side of the Hill explores the impacts of a changing climate in rural Eastern Oregon – as seen through the eyes of local leaders on the ground. From innovative timber operations in Wallowa County to large scale solar in Lakeview, we amplify the voices of rural communities often left unheard. In a time of unprecedented cultural divide between rural and urban Oregon, we find common ground in an urgency to address a changing landscape.

Mixing art and experimental documentary, this film weaves different voices together in search for the possibilities of artistic expression and explores the real and imaginary boundaries of creativity.

In 2016 from the summer through the harsh winter at Standing Rock, North Dakota, the youth of many tribes unite the Native Nations for the first time in 150 years and rise up in spiritual solidarity to non-violently fight for Unci Maka (Mother Earth) against the 3.8 billion dollar Dakota Access Oil Pipeline (DAPL). These young Native leaders known as water protectors join together to honor their destiny as they pray and protect Mother Earth by leading a peaceful movement of resistance which awakens the world.

A 12 year old boy is left with the responsibility of taking care of his rebellious younger sister. Their sibling rivalry is put aside when she goes missing leaving him panicked considering the dangers of this unknown trailer park community.

Anton is a young, aspiring, actor, who has been given the chance to make his dreams come true and sign with Hollywood’s elite talent agency: Hollywood Gates. On the cusp of stardom, only the agency’s receptionist, Grant, dressed as the devil, stands between Anton and his dreams. In order to enter Hollywood’s Gates, Anton must decide how much he’s willing to sacrifice to make his dreams a reality.

Skeptical Donna agrees to accompany her elderly friend, Julianne, to Cassadaga, Florida, the self-proclaimed “psychic capital of the world”. Only motivated by nosiness, she’s pissed as all hell, when Julianne shuts Donna out of the psychic reading. Donna must spend the day wandering around alone, her mocking energy colliding with sincere believers until she finally agrees not to knock it till she tries it. This docu-narrative short draws upon Cassadaga and the people who live there, in order to examine the different ways we relate to the kind of truths that you can’t see or touch.

While the Space Race, the Arms Race, and a myriad of other Cold War competitions are common knowledge, few know that the United States and Soviet Union faced off in a race to see which country could dig the deepest hole. This lack of public awareness is particularly surprising seeing that one of the countries may have discovered Hell in the process…

THE OCEANS ARE THE REAL CONTINENTS Director Tommaso Santambrogio

Having Cuba as a background, decadent and in crisis, in a black-and-white lacerated by the Caraibic swinging rain, Alex and Edith, a couple in their 30s, live their love story made of small daily gestures, stories from the past, nostalgia, and a deep intimacy.

THE OTHER BORDER Director Justin Zimmerman

High school student Gerardo Hernandez – raised in the United States since six months of age – was one of over 100 undocumented workers arrested by ICE in Ohio on June 5th, 2018. Gerardo spent almost 2 months in prison before being released… and is now scheduled to be deported in early 2020. THE OTHER BORDER is his American story, told through intimate interviews with Gerardo and his sister, Karime, and shot exclusively on 8mm and 16mm film.

Rose, Mitch, and Trevor make up the lo-fi rock band Tired Eyes. The trio have a small gig tonight, which means schlepping gear from a cramped practice space in Brooklyn to the middle of Manhattan. Unfortunately, the city has a way of making even the simplest of tasks absurdly difficult.

“When you’ve never had a home, you never know where you’ll find one.” 16 year-old Emma and her just-paroled mom are en route to a Native American drug addiction treatment center in Oregon’s remote high desert when they encounter a young rancher feeding his cows.

Tribute City goes behind the scenes of Portland’s thriving tribute band culture to explore how these dedicated musicians keep the music of the past alive for present-day audiences. As more and more rock ‘n roll icons pass on, talented artists like the ones in Tribute City see their work as a performance, a craft, and an opportunity to connect with fans through the music we love and remember.

Three estranged siblings attempt to reconcile over their mother’s suicide, torn between mourning and greed.

At the start of the COVID pandemic, I found myself obsessively returning to YouTube to watch Stevie Nicks singing in Annie Leibovitz’s NYC studio before a Rollingstone photo shoot. The video is voyeuristic, candid, and, thanks to YouTube, eternally preserved. While this moment sits as a pop culture revelation on VHS, YouTube is also home to moments of maddening darkness. Wild Heart 1981 / 2020 is a journey into both of these worlds utilizing 16mm film, found footage, and replacement animation.