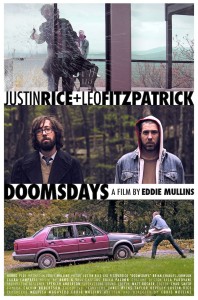 We reached out to our friends at FILMMAKER this year, asking them to make a few selections for the festival. We were thrilled with their choices, including the short film QASIM, and Eddie Mullins’ under-celebrated comedy, DOOMSDAYS— which screened in the MoMA series “Best Film Not Playing At A Theater Near You.”

A pre-apocalyptic comedy, DOOMSDAYS follows the misadventures of Dirty Fred (Justin Rice) and Bruho (Leo Fitzpatrick), a pair of free-wheeling squatters with a taste for unoccupied vacation homes in the Catskills. Their commitment to the lifestyle is challenged, however, when a runaway teen and an aimless young woman join their ranks.

“…might be the best American slacker film of the 21st century.“

Dirty Fred (Justin Rice) and Bruho (Leo Fitzpatrick) aren’t sanguine about the future. Convinced that dwindling petroleum resources will soon bring the modern world to a halt, they’ve dropped out of productive (and vehicular) society, choosing instead a life of free-wheeling vagabondage. As they trek across the Catskills, they break into a series of vacation homes, holing up until they either run out of food or are chased off. The pattern is interrupted, however, when they run across a teenage boy (Brian Charles Johnson) who insists on joining them. No sooner is he assimilated than an aimless young woman (Laura Campbell) also comes aboard, and the dynamic of the group changes with significant consequences for all.