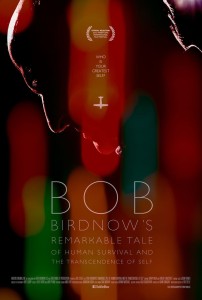 Two old friends reunite at a conference in Dubuque, Iowa where Bob, the reluctant guest speaker, is slated to give a motivational speech to a struggling sales team.

“ The title character, Bob Birdnow, played with exacting care by Barry Nash, is a man whose intense outward ordinariness (with a couple glaring physical exceptions) belies the horrific tale he delivers to us in meandering monologue form, under the guise of “non-motivational” speaker. Nash inhabits this simple man in wonderful detail, and Steele has a way with words.”

When invited by an old friend (Robert Longstreet, Take Shelter) to speak to a struggling sales team at a conference, Bob Birdnow (Barry Nash, Dallas-based stage veteran and on-air talent coach for CNN, ESPN, and NBC) reluctantly agrees. Bob’s attempt to say something motivational takes an unexpected turn when, forced off script and desperate, he begins the one story he’d hoped he’d never have to tell.

Based on director Eric Steele’s (Cork’s Cattlebaron) hit one-man play/experimental theatre piece in Dallas, Texas, Bob Birdnow takes the viewer on a unique and unforgettable journey that brings us face-to-face with one of life’s biggest questions…Who is your greatest self?

Eric Steele (Writer/Director)
Eric Steele is a filmmaker, playwright, and producer from Dallas, TX. Writing and directing credits include the short films “Cork’s Cattlebaron” (2012) which was screened last year at the Hamptons International Film Festival, and “Topeka” (2010) which premiered at the USA Film Festival. “Bob Birdnow” is Steele’s feature film directorial debut. Producing credits include Sundance Official Feature Film Selection “Pit Stop” directed by Yen Tan (2013), Clay Liford’s “WUSS” (2011) which premiered at SXSW and won the Audience award at AFI, and “the Verdigris” a documentary about Will Rogers (in production). In 2010, Steele and three other filmmakers formed Aviation Cinemas Inc and restored the Historic Texas Theatre in Oak Cliff, TX which they now operate.