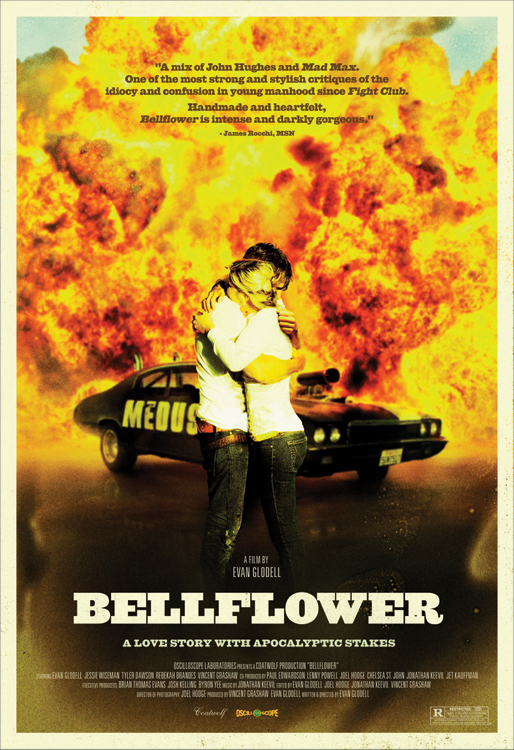 Best friends Woodrow and Aiden spend all of their free time building MAD MAX-inspired flamethrowers and muscle cars in preparation for a global apocalypse.  But when Woodrow meets a charismatic young woman and falls hard in love, he and Aiden quickly integrate into a new group of friends, setting off on a journey of love and hate, betrayal, infidelity, and extreme violence more devastating and fiery than any of their apocalyptic fantasies.

“Here’s a movie that starts in your face and, amazingly, keeps coming at you. That’s a good thing. Writer-director Evan Glodell’s explosive debut feature is a thing of toxic beauty.”

“(Bellflower) represents the debut of a one-of-a-kind filmmaker, a natural driven by wild energy, like Tarantino.”

Skype Q & A with Director Following the Film

Originally from Wisconsin, Glodell moved to California in his early 20s with a group of close friends to pursue his dream of becoming a filmmaker via their production collective “Coatwolf.”  His credits include directing Cursive’s “Let Me Up” music video, cinematography on horror movie PLACEBO and short film SAVANNA, and conceptualizing and starring in the edgy sitcom BOSS OF THE GLORY for STIM TV.  BELLFLOWER is Glodell’s feature-length directorial debut.