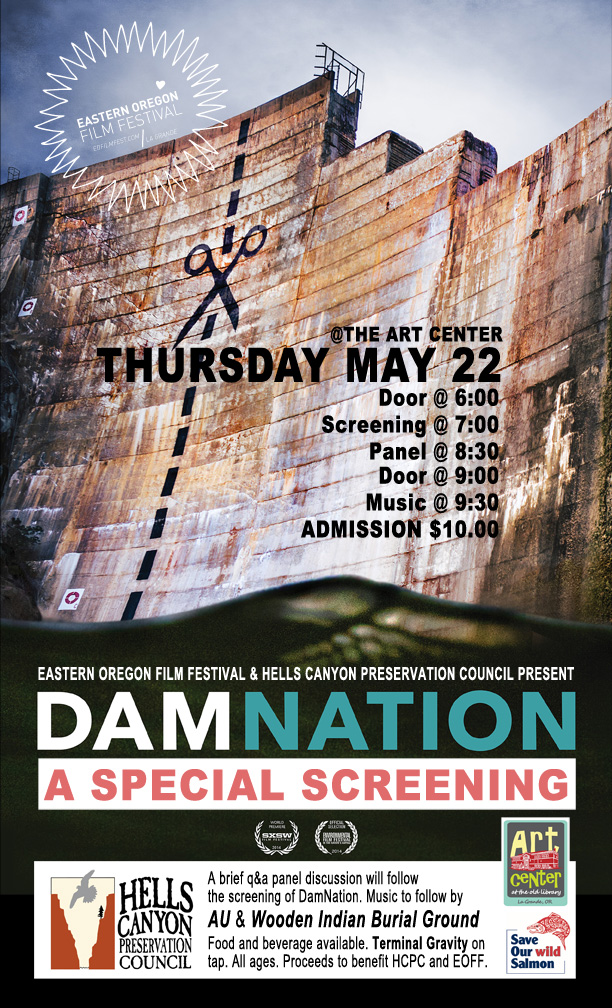 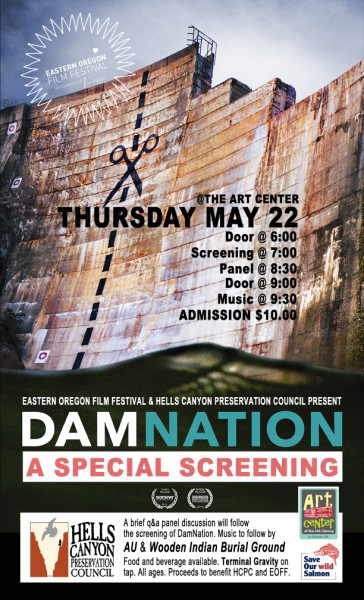 The Sixth Annual Eastern Oregon Film Festival will be held May 7-9, 2015 in La Grande, Oregon.

In honor of the new spring time dates and our mission to bring compelling film, music, and conversation to the Grande Ronde Valley,  Eastern Oregon Film Festival and Hells Canyon Preservation Council are bringing La Grande a special presentation of the SXSW ’14 Audience Choice winning documentary film, DamNation. The documentary will be followed by a Q&A / panel discussion and topped off by music from Portland’s AU and Wooden Indian Burial Ground.  Beer and good eats available.

ABOUT THE FILM: This powerful film odyssey across America explores the sea change in our national attitude from pride in big dams as engineering wonders to the growing awareness that our own future is bound to the life and health of our rivers. Dam removal has moved beyond the fictional Monkey Wrench Gang to go mainstream. Where obsolete dams come down, rivers bound back to life, giving salmon and other wild fish the right of return to primeval spawning grounds, after decades with- out access. DamNation’s majestic cinematography and unexpected discoveries move through rivers and landscapes altered by dams, but also through a meta- morphosis in values, from conquest of the natural world to knowing ourselves as part of nature.

A brief q&a panel discussion will follow the screening of DamNation.  We are fortunate to have as panelists ….. (more info to come)

Gilly Lyons, Policy Director for Save Our Wild Salmon, has worked with the organization since 2003 and is based in Portland, Oregon.  The organization is actively involved in restoring healthy wild salmon and steelhead populations to the Snake and Columbia Rivers system, working to develop a plan that helps these populations and moves them away from the risk of extinction.

Brian Kelly, Restoration Director for Hells Canyon Preservation Council actively works to restore fish habitat in the Blue Mountains, Wallowas and the greater Hells Canyon region.  He has led HCPC’s work to protect clean air and water from the impacts of energy developments.

ABOUT THE MUSIC: AU (pronounced “Ay-you”) is the work of multi-instrumentalist Luke Wyland with Dana Valatka on drums and Holland Andrews on vox and clarinet. (WE LOVE THESE PEOPLE – AND ARE SMITTEN EVERY TIME). Happy to take influence from grey skies & early sci-fi novels, Portland’s Wooden Indian Burial Ground brings a fuzzy, sweaty, reverb drenched beast to the dinner table. Come dancing.

Based in La Grande, Oregon, Hells Canyon Preservation Council was founded in the mid-1960s by a very diverse group of persons who had seen too many dams choking the Snake River.  They said “No More” and succeeded in stopping further damming in Hells Canyon, saving the last remnants of the free-flowing Snake River and the lower Salmon River as well.  The establishment of the Hells Canyon National Recreation Area in 1975 was a result of those efforts.

Since then, their work has spread greatly, both in focus and reach.  Being one of the oldest, most effective environmental groups in the area, Hells Canyon Preservation Council’s is worthy of local support as one of the main sources of wild lands & wildlife protection for almost fifty years!  Get involved and join the band of people fighting for environmental justice in this treasured part of the country.