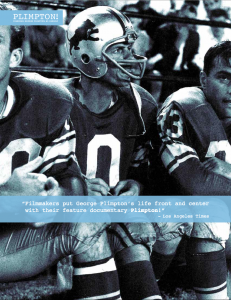 Using Plimpton’s own narration, the film joyfully celebrates a life lived fully, richly and strangely. For many, it’s difficult to imagine this life was lived by just one man.

“Entertaining profile of the self-avowed participatory journalist and his tumultuous life and times.” -Variety

Plimpton hung out with U.S. Presidents, played quarterback for the Detroit Lions, forced Willie Mays to pop out in Yankee Stadium, photographed Playboy models, played goalie for the Boston Bruins, struck the triangle for the New York Philharmonic and acted alongside John Wayne, Warren Beatty and Matt Damon. Some of these things he did well. Some he didn’t. But they were always amusing and inspiring.

He co-founded and edited The Paris Review for 50 years, one of the most influential literary magazines in history. The publication launched the careers of some of our generation’s finest writers, from Philip Roth and Terry Southern to William Styron and Jay McInerney.

We are thrilled to collaborate with the Eastern Oregon Word Round-up to screen this wonderful film. George Plimpton devoted a lifetime to supporting and pushing the boundaries of literature. This insightful documentary captures his inspirational courage and commitment. It’s a perfect match for an audience of literary aficionados. We’re honored to showcase the first screening of the film in the Northwest.